Written by Carl Daikeler – http://carldaikeler.blogspot.com/
One day in 1981 I was a senior walking down the halls of North Penn high school, wondering where I would go to college. A poster in the hallway caught my eye. It featured a guy with “Dutch Boy” length hair balancing a trombone, heavy texts, science equipment, a football, spirit banner,and a large silver 35MM film canister in his arms. He was truly loaded down and the message was clear: “This school was a great place to party!” OK, actually the message was: “This school had everything, including film and TV.”

That poster brought Ithaca college to my attention, and lead me to enroll. Beachbody founding coach Dick Comanzo and All-American diving champion was they guy featured in that poster. 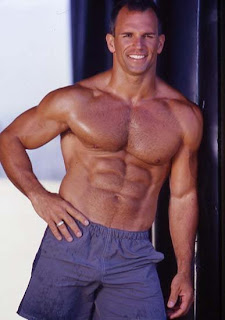 I was informed by friends that Dick passed away peacefully, from an inoperable brain tumor, on November 29, 2008, surrounded by friends and family. Throughout his courageous three-year fight with brain cancer, Dick’s spirit, optimism, love of friends and family and passion for living never ended. That includes his desire to help people get fit and healthy with the products that he helped make famous, especially the program that gave him this transformation, the original, Power 90.

Dick was an exceptional human being who had a profoundly positive, lasting impact on everyone he met. He had an extraordinary capacity to bring the best out in those around him, and he used that gift every day of his life. This was most evident during his courageous battle with illness. He always strove to be independent and self-sufficient, serving as an inspirational example of how one should face life’s obstacles. I know everyone says that about people when they cross-over, but in this case, Dick was a “poster boy” for facing life with positivity, hope, and an incredibly good attitude. He taught me much in that way.

I actually never knew Dick in college except for his image on that poster. But his commitment to getting back in shape with Power 90 in 2001 brought him back to my attention when he sent his success story in to be considered for the trip to Hawaii as a Power 90 success story. Once again, “SqueakyD” as he became known on the message boards, he was poster boy material and a star testimonial in our Power 90 infomercial. 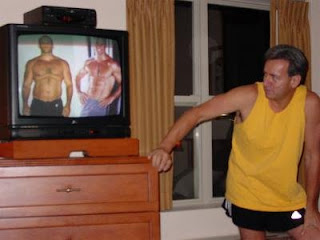 Dick was very involved in the Southeast Brain Tumor Association and their annual Race for Research, raising awareness and donations for the fight against brain cancer. When he could no longer run or walk in the Race, he cheered his teammates from the sidelines.
Dick is survived by his son, Dean Comanzo; his partner of 14 years, Shawn Purcell; his parents Ralph and Gail Comanzo; his brother Douglas (Amy) Comanzo; his sisters, Diane (Michael) Jones; his special angel Amy Gail Comanzo; his grandmother, Ann M. Comanzo and his nieces and nephews: Nicole, Matthew, Timmy Comanzo and Daniel and Katie Jones. 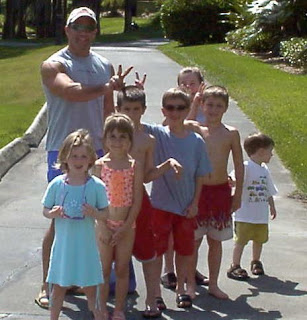 A celebration of his remarkable life will be held at 3:00PM, Friday December 12th, at the Rich Auditorium-Woodruff Arts Center: 1280 Peachtree Street NE, Atlanta, GA 30309.

Dick’s family asks in lieu of memorials and or flowers that donations be sent in Honor of Dick Comanzo to the Southeastern Brain Tumor Foundation. 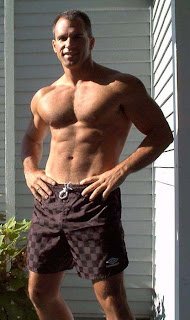 Dick, you will be missed by me and so many others, and in honor of your contribution to our lives, your example and inspiration will be celebrated for decades.

NPR has a list of some of the ways to donate to Hurricane Harvey relief.  For more ways to help, click here. […]

Using the concept of the CNN Heroes, we would like to recognize individuals in the Team Beachbody community who have demonstrated their […]

What If I Don’t Know People Interested In Starting Their Own Business? 7 Steps to Expanding Your Circle to Include the “Right” […]

Walmart and Whole Foods are battling it out for supremacy in the organic food business, Walmart having the advantage in name recognition, […]